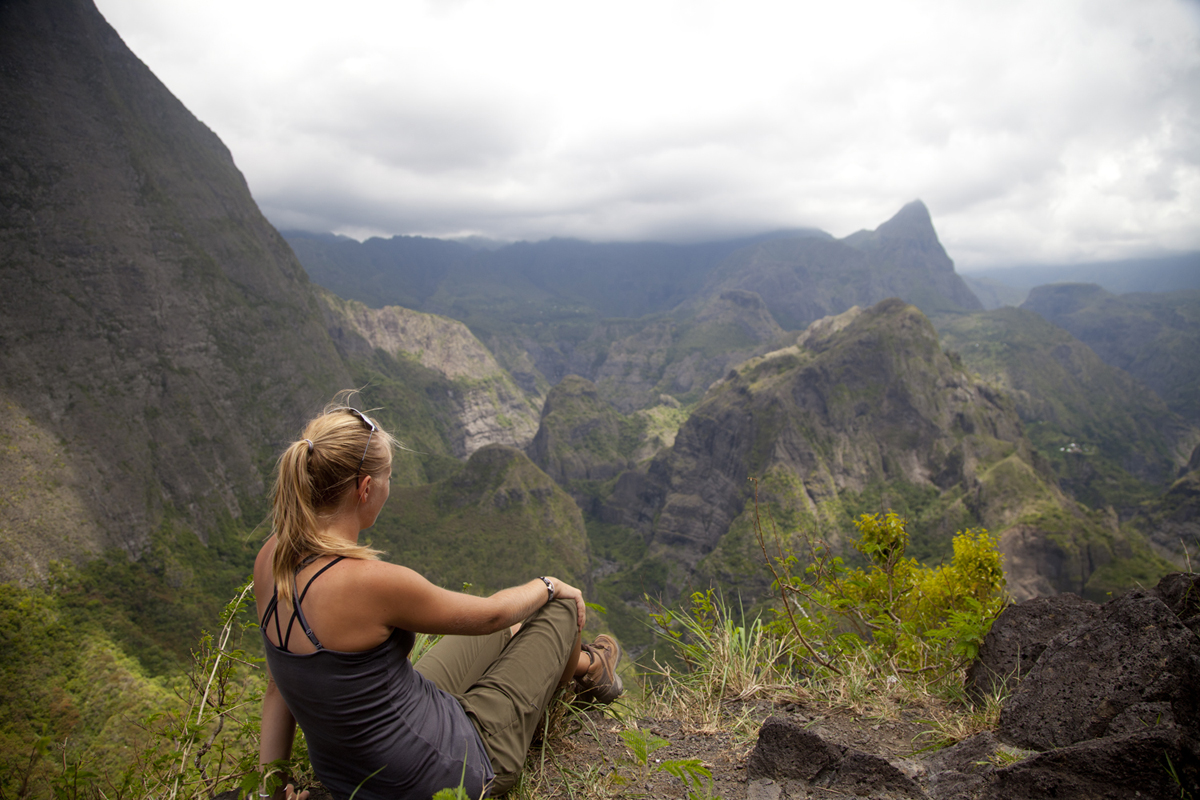 It’s on an island paradise that Aly Hansen has found herself for the last four months, living amongst the population of about 70,000 people in the city of St. Pierre.

“When I began this trip, I had one question I needed answering: Could I see myself being an adventure photographer for a living?”  Hansen corresponds via email, Facebook and her blog site.  St. Pierre is the third largest commune, located on the southwest side of Réunion Island, a French-controlled island. Many of what people in the United States would think of as small incorporated townships literally translates to commune.

Born and raised in Bozeman, Montana, Hansen is not a spirit to be contained so easily.  The picturesque mountains that surround the Gallatin Valley are indeed adventurous but it was the lure of what was beyond the snowcapped Bridgers and the rugged Gallatin’s that held her sway.

Says Hansen, “People always joke, ‘Oh, you want to work with National Geographic, don’t you?  Isn’t that what photographers do?’  Whenever I get that reaction, I immediately think back to my very first day in my first photography class.  My professor at the time was attempting to bring us back to reality.  She said, ‘Very few people work for National Geographic.  The likelihood of any of you working for that publication is slim to none.  Find a more achievable goal for yourself.’”

For Hansen, the achievable goal was to pick up and move.

“By 2011, I had two degrees, no job, and a loved one overseas defending the country.  I ended up taking the first job that would hire me – a secretary position that I was well overqualified for.  It depressed me more than I can say, and I realized deep in my soul that if something didn’t change, I may go postal.”

It might seem obvious as to why a person would choose photography when they start globe-trotting but Hansen says, “I had to take a darkroom class for my film degree and absolutely fell in love with [photography]. Everything, the smell of the chemicals, the quietness of the darkroom … and it’s just magic. Putting a piece of paper in a bath and suddenly an image appears … It’s so cool. I decided I liked it more than film. It was something that completely appealed to my nature.”

With this new found love, the ball began rolling. Hansen says she was sitting next to a woman at this job when, “She began to talk about this amazing opportunity she didn’t know if she felt comfortable taking.  [Hansen’s coworker] had studied French in university, and had decided on a whim to apply for a teaching assistant job in Réunion Island.  After weighing the pros and cons about it, she decided to take the job, and invited me along for the adventure.  It was a total pipe dream; we would wile away the monotonous hours at work with discussions on what we would do once we both arrived on the tropical paradise.”

Hansen continues, “My photographic mind began conjuring up images of these places.  And then I started thinking.  What if I used this trip to help further my career?  I had been toying with the idea of being a travel photographer, combining my two greatest passions into one amazing job.”

And what did her husband think of this?  “My husband and I talked it over and he agreed: This trip was something that I had to do.  I had to discover if this is what I would want to do with my life, I had to discover if I could handle the pressures of traveling extensively on my own.  With the most bittersweet feeling, he purchased my ticket.  I would be going alone. He would continue his military training, and we would meet again when I came back to the States.”

Réunion Island was like stepping into another world.  Expectations of culture clash, especially from the potentially dangerous neighbor of Madagascar, seem to vanish at the shores of the island.

“Racial and theological groups live in complete harmony here.  It seems that every race is represented, and racism is non-existent.  The only ‘taboo’ subject down here seems to be homosexuality.”

But the veritable differences don’t stop with thoughts and ideologies.  “The culture down here is completely at odds to what I’m used to.  I grew up in Bozeman, and while it can be a laid back community. It has nothing on Réunion Island.  The average work week (on Réunion Island) appears to be about twenty hours, unemployment is at 30 percent, and the large majority of the populace is on government subsistence.  The American efficiency and work ethic would appall most of the people here,” Hansen said.

This isn’t to say that the country is completely backward or that the citizens are Stone Age primitive.  Rather there is a curious amalgam of the super rich blending with the incredibly poor.  In one shopping area it is possible to have island fruit stands next to high end boulangeries (or bakeries); surf shops with Billabong ads splashed across the front next to a shop selling clothes at five euros or less.  “About a mile from my flat there is a Mac store next to an abandoned lot.  The dichotomy of consumerism next to poverty is so strange, and I don’t know if I’ve successfully captured it with my camera.”

This hasn’t stopped Hansen from trying to capture that essence, though, with extensive travel through the island’s interior.  The island is a hiking Mecca.  Cilaos, one of the three cirques, or natural amphitheatres, is right above St. Pierre.  A two hour bus ride up the road dubbed “The Road of Two Hundred Turns” allows travelers into a picturesque town that smacks of a Swiss ski town.

Salazie, another cirque, opens up to the east of island and instead of the jagged volcanic peaks of Cilaos; it holds some of the most impressive waterfalls on earth.  Another incredible sight is the Trou de Fer.  A startling depression in the earth, Trou de Fer is an almost perfect bowl surrounded by waterfalls that drop two hundred meters into a pristine blue pool.

Hansen says, “My favorite thing in Réunion, and almost possibly the most incredible place on earth, is the third cirque: Mafate.  Mafate is….. I don’t even know how to describe it.  A World Heritage Site, the only way to get into Mafate is on foot.”

The journey into this other world begins in a town bearing the name Sans Souci.  An arduous 11-mile hike (at times the trail is cut into the side of the cirque wall) later brings travelers to the first hamlet in Mafate, called Ilet des Orangers.

“After making one of the many turns on the trail, I came across the coolest thing I have ever experienced in my life.  Mafate just spread out around me.  On various plateaus small villages huddled in groups.  Crazy volcanic peaks poked up everywhere, waterfalls cascaded down from the cirque walls and it was so green.  Green everywhere.  I hummed the tune to Jurassic Park as I put my camera to my eye and began snapping away furiously.  I fell in love with Mafate so much that I have returned since two other times,” Hansen said.

“When I began this trip, I had one question I needed answering: could I see myself being an adventure photographer for a living?  I wasn’t totally sure.  After four months of being abroad, and a couple more weeks left in which I’m heading to Madagascar, I can safely say that yes, I can do this for a living.  I want to do this for a living.”

Hansen sums up her entire expedition with, “Adventure may hurt you, but monotony will kill you.  And it’s true.  That’s completely how I feel.  So I’m going to continue on my adventures, create new images, show the planet off and pray that I do Mother Nature some justice with my camera.”