The racers picked their lines.

Two inches of fresh powder covered the course as a nearby thermometer read 20 degrees. Though the sky remained gray with the prospect of more snow, visibility at the starting line proved excellent. The competitors yipped excitedly as they prepared to race under perfect conditions.

The race official raised a megaphone to her lips.

In an instant, seven corgis tore across the field at mach speed. For four seconds, spectators watched from behind a fence as a mob of tan, white and black bodies bounded through the snow. The dogs ran so fast that their owners could barely discern which belonged to whom.

Reaching the finish line first was Tulip, a tri-colored corgi sporting a purple scarf around her neck. Many owners chose to outfit their corgis with some sort of scarf or sweater, in an effort to keep track of their dog in a sea of 70 near identical canines. END_OF_DOCUMENT_TOKEN_TO_BE_REPLACED 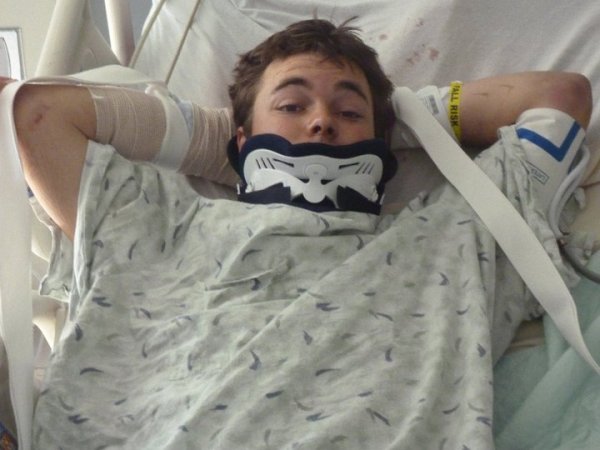 Reid Pletcher can be described as obsessive compulsive. You may not find him opening a door four times before entering a room, but he spends hours upon hours mastering a skill until he’s near perfection.

Over the course of Pletcher’s relatively short life he has already mastered an impressive number of activities, hobbies, and sports. While each of Pletcher’s accomplishments are considerable, the most notable one was surviving a life-threatening injury.

It was an injury caused his life to come to a jarring standstill as he struggled to redefine who he was. Now three years later, as he gets ready to depart for Sochi, Russia, as a Paralympic guide for a blind skier, he has begun to once again add to his long list of accomplishments.

Pletcher was born and raised in the small town of Sun Valley, Idaho, where he quickly discovered that he possessed a natural ability to master anything that crossed his path.

He has already learned to unicycle up mountains, juggle fire, crochet hats, play the guitar, complete a rubrics cube in under a minutes time, ice climb, kayak down class-V rapids, telemark ski, snowboard and even pick locks (He once listened to the minute clicks on a combination lock until he gleaned the combination, a feat that some would be hard pressed to believe).

However most of Pletcher’s better-known accomplishments come in the form of competitive sports. He has been Nordic skiing since before he can remember and began to earn himself a reputation among the nation’s best while in high school. END_OF_DOCUMENT_TOKEN_TO_BE_REPLACED

The overhead fluorescent lights illuminate the brown floor of the indoor tennis court. A group of four guys cheer on their friend as he serenely pedals a six-foot tall unicycle. His arms extend above the ground as the wheel follows the boundary lines of the court.

The extraordinarily tall unicycle is called a Giraffe and is one of the six new unicycles that Montana State University’s student club, Unicycling For Change, purchased during the 2013 to 2014 academic year.

The guys are friendly and eager to help beginners, like myself, learn to ride. Bracing my back against the wall, I push my foot down on the pedal and use the backward momentum to propel myself onto the seat of the unicycle, setting both feet on the pedals.

Dressed in a pair of worn out jeans, a black fleece and a Scrubby’s Car Wash hat, 24- year-old Chad Green looks exhausted from a long day of work, but manages to hold a lively and humorous attitude.

He smiles as he grabs the collar of his English bulldog.

“He’s friendly don’t worry,” he says. “I named him Royce, like Rolls Royce, you know?” says the Bozeman native, who grew up across the Bridger Canyon Road from the “M” hiking trail.

Green presents himself with confidence, but not in a way that is over the top, clearly showing that he is not one to take life too seriously.

He has lived life to the fullest, as he is all too familiar with how quickly life can be taken away.

Green has lost three family members: his uncle, cousin and father, due to avalanche tragedies. END_OF_DOCUMENT_TOKEN_TO_BE_REPLACED

The time it takes for an ambulance, police cruiser or fire truck to reach your front door is the last thing on most people’s minds. What almost no one considers is how those emergency personnel can even find a single apartment in a high-density building or neighborhood.

“The difficulty is accentuated by the fact that, in these high-density housing developments, building numbers are often arranged in an illogical manner,” said Diana Cooksey spatial sciences instructor at Montana State University.

The answer to this fundamental problem is found in the maps carried in fire engines and integrated into the Enhanced-911 (E-911) computer system. In the world of firefighting response times are everything, where mere seconds can mean life or death and losing everything you own. END_OF_DOCUMENT_TOKEN_TO_BE_REPLACED

Becoming mayor of Bozeman was not Jeff Krauss’s childhood dream. In fact, Krauss, who was described by his son Ryan as “an efficient perfectionist,” was born in Kentucky and grew up in Richmond, Va., and had never even been to Montana until after he had graduated high school.

However, Krauss, now 60, fell in love with the area, and in the early ‘90s, he moved here for good, eventually serving Bozeman as mayor and now in his third term.

Krauss’s road to the mayor’s office has been a long and winding one that has taken him almost 30 years and multiple career changes and cross country moves to navigate.  END_OF_DOCUMENT_TOKEN_TO_BE_REPLACED

Lift. Tone. Burn. This may be an unusual catchphrase for those who have not yet heard about the rapidly growing Pure Barre technique.

According to the franchise website, Pure Barre utilizes the “ballet barre to perform small isometric movements set to fantastic music. PureBarre is a total body workout that lifts your seat, tones your thighs, abs and arms, and burns fat in record-breaking time.” The technique is also designed to, “block ‘life’ out for the hour, creating mental benefits,” according to the website

The workout is broken down into multiple sections to target the areas that women struggle with most including the hips, thighs, seat, abdominals, and arms, according to program developers. After completing a warm-up complete with a 90-second plank, push-ups, weight work and more, clients transition into thigh work. END_OF_DOCUMENT_TOKEN_TO_BE_REPLACED

And Barry Hukill has been living the dream for more than two decades.

Growing up in a suburb of Chicago, Hukill became accustomed to the city life early on. Being the second oldest of four siblings, he was expected to set high standards.

But now at the age of 42, Hukill is a venerable member of the Big Sky ski-bum community.

“I do what I love year-round,” said Hukill. “I was never meant to follow the social structure of corporate America.” END_OF_DOCUMENT_TOKEN_TO_BE_REPLACED

Most Americans have heard African American history from the southern point of view. It seems there is a different side to this story in the north.

Most history begins with the account of the first slave ship arriving in Virginia in 1619. This version does not tell of how slave traders bringing the first slaves to Massachusetts were arrested by the Puritan/Pilgrim government.  These slaves were allowed to return to Africa. According to historian David Barton, most students are taught the “bad and ugly” of history rather than positive aspects.

Very few have heard of men like Wentworth Cheswell. Considered  the first African American elected to office in New Hampshire in 1768, Cheswell was the first black landowner in New Hampshire. At age 21, Cheswell was already well established. He was even a stalwart in his church. In 1767, he married Mary Davis and the couple eventually had 13 children. END_OF_DOCUMENT_TOKEN_TO_BE_REPLACED

There is more to Rick Vancleeve than his successful business, lake house on Hebgen Lake, and constant fun travelling and meeting more people.

For as long as he can remember, Vancleeve has lived by the motto: “If I died tomorrow, then I would be able to say I had more fun than anyone I know.”

But in March 2013, “just after snowmobiling season,” Vancleeve jokingly adds, he went into the hospital for a checkup, and came out with a more serious health problem.

Vancleeve was diagnosed with Chronic Myeloid Leukemia, commonly referred to as CML. He later learned there would not be a cure, but a way to keep the CML in check, usually indefinitely.

“I just take a pill a day, and so far it’s been good,” Vancleeve says.

“I always get these gut feelings, and honestly, I really wasn’t worried,” his wife Cindy Vancleeve said about her reaction to Rick’s diagnosis. “It turned out to be a miracle.” END_OF_DOCUMENT_TOKEN_TO_BE_REPLACED