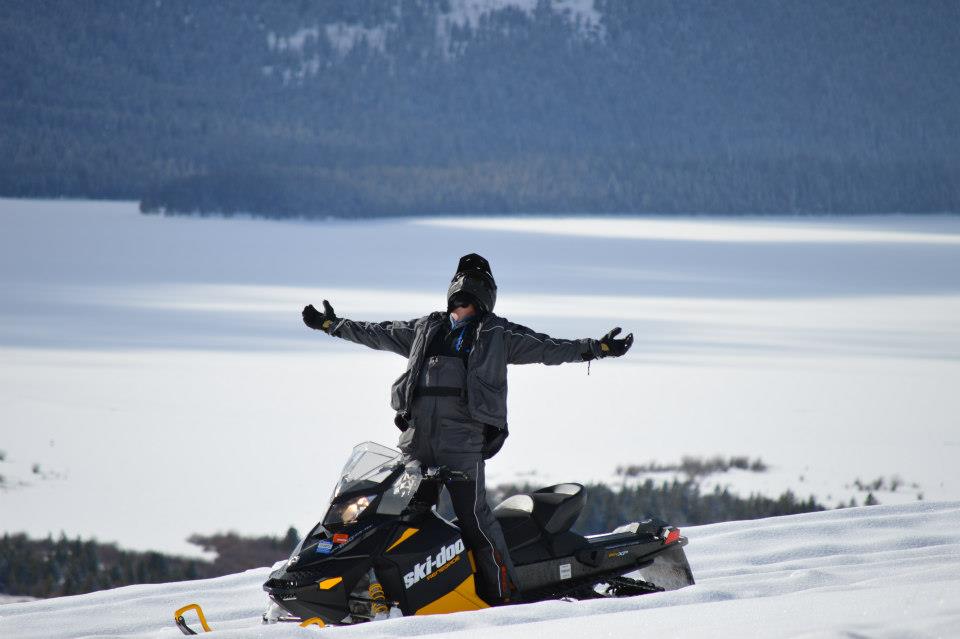 There is more to Rick Vancleeve than his successful business, lake house on Hebgen Lake, and constant fun travelling and meeting more people.

For as long as he can remember, Vancleeve has lived by the motto: “If I died tomorrow, then I would be able to say I had more fun than anyone I know.”

But in March 2013, “just after snowmobiling season,” Vancleeve jokingly adds, he went into the hospital for a checkup, and came out with a more serious health problem.

Vancleeve was diagnosed with Chronic Myeloid Leukemia, commonly referred to as CML. He later learned there would not be a cure, but a way to keep the CML in check, usually indefinitely.

“I just take a pill a day, and so far it’s been good,” Vancleeve says.

“I always get these gut feelings, and honestly, I really wasn’t worried,” his wife Cindy Vancleeve said about her reaction to Rick’s diagnosis. “It turned out to be a miracle.”

Most people discover the true meaning of living life to the fullest after a life-threatening experience, but this disease didn’t change Vancleeve’s way of life at all.

With his father in the U.S. Navy, Vancleeve grew up going to 17 different schools, including Guam, Washington, and an all-African-American school in Oakland during the desegregation busing times. His family settled in Great Falls, Mont., where he met Cindy, his high school sweetheart.

“We met after a touch football game in the parking lot,” Vancleeve says with a laugh. The two met as juniors in high school, and later married their junior year of college.

Though he comes off to most people as the life of the party, the one who gets to have the most fun and has the most “toys,” he stays grounded by a family that has no fear of his disease.

“You told me when we were dating that you were never going to die, and that’s why I liked you,” Cindy Vancleeve laughs.

Rick Vancleeve has never been one to dwell on major issues. He tries to constantly focus on having fun and makes it his responsibility to entertain others.

“You never thought we were having enough fun,” Cindy tells Rick.

Cindy adds that the main difference between the two is that she finds the journey important, and Rick: the destination. “I remember we were making a trip to Froid, and you had games for us to play every second of the way,” Cindy scolds.

“You can stop and smell the flowers but you better do it at 100 miles an hour,” Rick Vancleeve retorts.

Vancleeve played football for Montana State University as a defensive end, and was a part of the 1976 team that won the national title. Sonny Holland, the head coach of the championship team, played one of the biggest roles in Vancleeve’s life.

“If he told you your hair was a little long, you went straight to get a haircut,” he says of the “quiet influence” Sonny Holland had on his players. Vancleeve and former teammates recently donated to the new scoreboard in the stadium in Holland’s honor.

During his college football career, Vancleeve experienced the highest of highs but also some of the lowest times. The team lost to the rival University of Montana Grizzlies his senior year, and he says he hasn’t been to Washington-Grizzly stadium since.

“I don’t even stop to go to the bathroom there,” he chuckles, showing the cutthroat rival attitude that any die-hard ‘Cat-fan has. Vancleeve’s oldest son, Brandon, also played for MSU until injuries sidelined him.

The Vancleeves now hold season tickets every year, as well as a large tailgating spot right behind the west entrance of Bobcat stadium. Vancleeve is also an avid member of the Bobcat Quarterback Club.

But Rick and Cindy are not the only Vancleeve’s holding season tickets every year. Their two sons and their wives, girlfriends, and children, as well as friends and colleagues, host season tickets all next to each other above the 50-yard line in the stadium.

Quality family time is not only spent screaming at Bobcat football games, but also in nearly every aspect of each other’s lives. Where Rick Vancleeve is, his entire family is, and that includes running their small business, Pine Cove Consulting (PCC). The technology company focuses on installing and networking servers for clients, mainly consisting of K-12 schools, according to their website.

Over 30 percent of the business is operated by the Vancleeve name, including two of his sons, Brandon and Colby.

Prior to starting PCC, the Vancleeves moved to Thermopolis, Wyo., where he coached high school football and taught a business technology class. Vancleeve also worked as a technology coordinator for the school. He then created a partnership with a colleague, doing technology service for K-12 schools. Vancleeve’s family struggled with the job transition, feeling as if they lost a part of their lives that they shared, and referred to this as “the darker times.”

“Brandon and I were devastated when he [Rick] quit coaching,” Cindy speaks of her oldest son, an obvious sports fanatic and aspiring football player at the time. “We were very involved with the team.”

The job transition was not only emotionally hard on the family dynamic, but also financially.

When the partnership split, the family relocated to Billings, where Vancleeve continued to work with switches, servers and computers for schools. And he found an unexpected business partner: in his wife, Cindy, and later his son Brandon.

The company since has turned into a successful small business, with 20 employees and clients mainly in Montana and Wyoming. The company received the Small Family Business Award from MSU last fall. The couple remarks that their integrity and doing what’s best for the customer is what made their company successful.

Vancleeve’s philosophy of having a close-knit team is what makes Pine Cove stand out.

“We never say you work for us. You work with us,” Cindy Vancleeve says of the company’s strong mentality for equality.

“Equality and honesty is the best policy,” Vancleeve says. But also, a major part of his repertoire is “work hard and play harder- to the extreme.” The company not only goes to places like Orlando for conferences, but also makes a decent sized pit-stop at Disneyworld.

And the best part about most of the company being family is that everyone gets the same vacation.

The Vancleeves and their closely-knit coworkers are constantly keeping up to speed on work, whether it’s at Disneyland or on a snowmobiling trip.

“Everyone on the outside sees pictures of us having fun and going places,” Rick Vancleeve said, “doing lots of things.… But we’re also all always checking our emails,” he says.

Vancleeve adds that a major advantage of having family as coworkers also gives them a reason to all spend time together. But as if they weren’t already spending nearly every waking moment together, the family and company became even closer when Rick Vancleeve’s life took an unexpected turn.

As the family wasn’t sure what to expect with his diagnosis, the company had to prepare for the worst, and employees quickly took on new responsibilities to keep Pine Cove going.

Shortly after the CML diagnosis, the couple packed up their lives and moved to Bozeman, to be closer to their oldest son, his wife, and two small children.

“I always thought about going to Bozeman, but I never really thought about leaving Billings.… that’s been harder than I expected,” Cindy said.

“They told us because of this illness to not make any life-changing decisions. We didn’t listen to that,” Rick Vancleeve jokes about the major decision to move just months after the diagnosis.

Vancleeve’s middle son, Colby and girlfriend Katie, who also work for the company, recently made the move from Billings to Bozeman as well. The two are living with Rick and Cindy until their house is ready.

The Vancleeves continue to cherish their fast-paced lifestyle.

“I’ve never had one boring day in my life,” Cindy says.

The family continues to spend and enjoy every moment together, because, as Vancleeve says, “Nothing’s safe in life.”