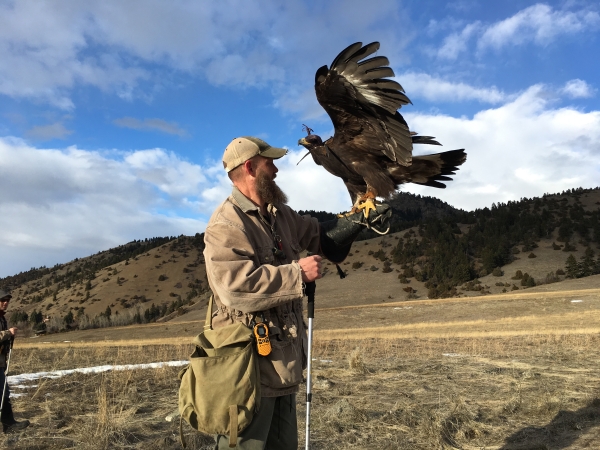 At the grassy base edge of mountain range is a place humans teach eagles to hunt again, where falconers help rescued golden eagles recover and gain back strength.

Rocky Connell is one of those falconers. He’s a 46-year-old son of a veterinarian, and grew up around animals in need of help. In this country golden eagles cannot be taken from the wild except in the case of rescue; a reality which makes the opportunity for him to fly and hopefully hunt with one a privilege.

An aspiring falconer must apprentice for at least two years before owning a bird, and must follow strict federal and state regulations as to what species they are permitted to trap or own. Over the years Rocky has put in countless hundreds of hours, and paid his dues.

Rocky’s day job leaves room for a life dedicated to birds. He bakes bread full-time for the Bozeman Co-op. Five days a week, his shift starts at four a.m., not ending until around one in the afternoon. By then his large light colored beard is usually made lighter with a dusting of bleached flour.

END_OF_DOCUMENT_TOKEN_TO_BE_REPLACED

First, her eyes begin to squint.

Then, the smile from ear to ear starts to sprout.

“Oh, this is a good one,” she said with the same excitement that many patrollers get when telling accident stories from their past.

“The worst accident I’ve been on, not really the most life threatening, but a good one,” she said, “was a kid who was going to fast through trees. Some ski racers said probably 40 mph when he hit a tree.”

From her momentary pause before detailing the proper velocity of the young boy’s travel, it is likely that her speed recount has a minor growth  spurt each time she retells this particular story.

“You can still see in the tree where he hit. When we cut his pants off, there was a piece of bone missing in his femur. It was pretty intense! It fell out into my hands!”

She cupped her hands as if she was still holding the fragment of femur in her palms.

“We pulled traction and got him to the hospital fast,” she exclaimed with her signature laugh, “with a plastic goodie bag for the ortho!”

END_OF_DOCUMENT_TOKEN_TO_BE_REPLACED

Yin YaLan pushed her glasses up the bridge of her nose and stuck her tongue out in deep thought. For every question that was asked of her, she had about 15 of her own, immensely curious how any writing can truly capture the personality of someone.

Once her own curiosity had been sated, she began telling stories of her childhood, complete with exaggerated arm movements and pauses for fits of giggles.

Yin, who goes by the chosen American name Tina, was born in Changing in the HuNan Province of China, or as she stated, “just tell them it is the south part.” She has two sisters and grew up with her parents, although their relationship was very strained.

“Like, for example, I only called them Aunt and Uncle until when I was 18,” Yin said. “Then they were Mom and Dad, but before then, just Aunt and Uncle.”

Yin said that she got into trouble a lot when she was younger. She skipped school often, and even admitted to drinking from a very young age. According to icap.org, before 2006, there was no minimum drinking age in the Republic of China. Yin said that even then, it was rarely enforced.

END_OF_DOCUMENT_TOKEN_TO_BE_REPLACED

Amidst the suburbia of Bozeman there is a house plastered in telltale signs of creativity. Its neighboring residences serve as the epitome of the American dream: two-car garages, well-manicured lawns, a child’s bicycle here and there.

This particular house, however, is not concerned with these status symbols. Instead, it boasts upwards of 30 ceramic pots and vases on its front porch alone; most intact, some broken by weather and even others that appear to have been damaged before — only to be meticulously pieced back together by their eccentric creator. Their birthplace was once a two-car garage that was entirely gutted and rewired to accommodate their earthly womb — a massive ceramic kiln.

The mastermind behind the creation of this ceramic display is David Dennis, who graduated from Montana State University with a focus on ceramics. One doesn’t need to have been to Dennis’ house before to know which one it is; the permanent taupe footprints that lead from his walkway, through his house, and into his garage studio make it quite discernible to anyone passing by.

END_OF_DOCUMENT_TOKEN_TO_BE_REPLACED

Stepping into Cactus Records feels like entering a carefully curated world. Every square inch of the walls are covered in colorful bits of musical memorabilia, patchwork squares of vinyl records; row upon row of CDs interspersed with odd curios and locally-made bits of this and that. This atmosphere is partially due to the shop’s long, 45-year history in Bozeman. But most of it springs from the shop’s latest owner and proprietor, Mike “Bueno” Good.

A native Montanan, Good was born and raised in Billings, but feels his true love is Bozeman.

“… (I)t has always been home more than anything to me,” he says.

Fourteen years ago he decided to combine his passions for Bozeman and music by buying Cactus Records from its previous retiring owners. The shop was first established in 1970, but when Good took over in 2002, it transformed. These days he can be found often behind the store’s counter, a conductor to the orchestrated chaos of music, clothing, jewelry, memorabilia and assorted quirky knick-knacks.

When Good first took over the shop it was a fairly standard music store, CDs and the like. The first change Bueno made was to build a massive collection of vinyl records. His previous job was in vinyl distribution for a record label in San Francisco so when he started at Cactus it was only natural to introduce more vinyl.

“I’m not a huge audiophile,” he says, “it’s more of a collecting thing for me.”

END_OF_DOCUMENT_TOKEN_TO_BE_REPLACED 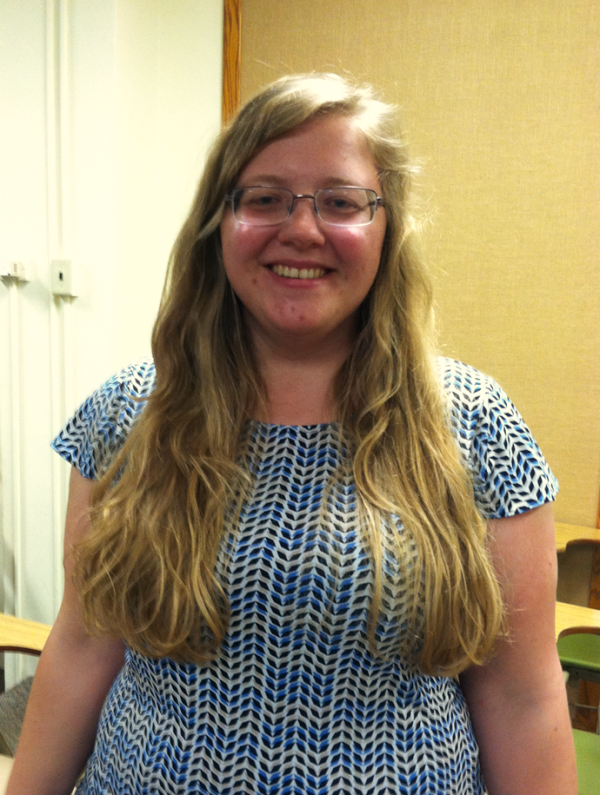 Kate Kujawa may leave those who encounter her with the impression that she is a jubilant woman, as wanton as water and as carefree as a crisp breeze – albeit with a nervous laugh – but behind those wire-framed glasses and flowing blonde hair resides a strong proponent of critical thinking, understanding, self-acceptance, and empathy.

Kujawa is a professor of contemporary issues in human sexuality at Montana State University. Though Kate loves her current teaching position, she never would have imagined herself a professor prior to taking the job.

Kujawa was raised by a single mother who worked constantly to support her children. She was familiarized with responsibility and drive at an early age. She recalls that in her youth, she was responsible for coming home on her own, doing chores and homework, and sometimes cooking dinner.

“I think it put it into my head that you don’t need to be in a relationship to have a family, and you don’t need someone else to be happy,” she said.

END_OF_DOCUMENT_TOKEN_TO_BE_REPLACED

“I just thought it was the most beautiful place on earth. I mean I’d seen nothing but snow and ice for almost a month and eaten just freeze-dried food, and the beauty was just overwhelming. And I wasn’t the least bit sick and tired of it.”

Growing up in Kentucky, Larry Day has always had a love of nature and being outdoors. He was fascinated by the unexplored landscapes that surrounded him, especially the Red River Gorge. It was there that he was first introduced to climbing, seemingly by accident.

Day’s first climb came after he was invited to join a spelunking club. Before one expedition the leader told them that he had loaned out the equipment, and asked if they would want to go rock climbing instead. His first ascent was a climb in 7-degree weather up Tower Rock.

This incredibly difficult climb had a profound effect. “I was hooked. It was just the greatest thing I’d ever done.”

Day explained that while exploring caves was fun, it held a stifling quality of being inside all day. But climbing was different.

“I can’t tell you how many times, at the end of the day of doing a climb…this sense of elation was just so powerful,” he said. “I was exhausted, but I felt like my feet weren’t touching the ground.”

END_OF_DOCUMENT_TOKEN_TO_BE_REPLACED

The eerie sound of bawling cows and crying coyotes fills the night sky as Buck Highberger walks through a pen of pregnant first-calf cows. The technical term for these pregnant cows is heifers. The majority of them are set to calve over the next three weeks.

Highberger is from Red Lodge and has worked various ranch jobs from New Mexico to New Zealand the majority of his life. He is accustomed to calving. He ended up with this calving job after the woman originally hired was run over by a wild heifer.

Tonight, Highberger needs to help a heifer calf. He spots the one he’s looking for, shining his flashlight on her white ear tag. The cow has been in labor since five in the evening and doesn’t look like she’ll be able to have her baby on her own. Right now, the calf’s front feet are visible, but the heifer has obviously spent herself.

It’s February in Montana, the Climbing Arrow Ranch replacement heifers are calving. These new mothers often need guidance in keeping track of their calves, some may even need help giving birth. The day crew keeps track of them during the workday and a night calver is hired to watch the heifers when the cow boss is off work.

END_OF_DOCUMENT_TOKEN_TO_BE_REPLACED

Education starts from the time you are born. One never stops learning, which is why educators like Riley Lubich are important. Working towards a degree at Montana State University, Lubich – who is 21 – is passionate about her love of teaching.

“Montessori’s main philosophy is that children naturally want to learn,” he says. “They love to learn. So at a Montessori they foster that natural love of learning and exploration that children have,” said Lubich while tying her hair up into a bun.

While Montessori is not a trademark name, Maria Montessori, who lived from 1870 to 1952, worked with handicapped and socially deprived children and learned how children concentrate. According to Little Tree Education’s website, Montessori discovered “children learn best by doing things for themselves, having the opportunity to correct their own mistakes… and not by receiving reward or punishment.”